In a satisfactory break from those incredible cool indie end of year lists here are the 10 albums which have been stuck on the collective DiR hearts, minds and stereos in 2009. Here a list which rocks!

In a year without new released from Funeral For a Friend and with Lost Prophets comeback emerging in early 2010, this years Post-Hardcore/Punk fusion post was filled by The Blackout. They not only filled the void but produced a superb album sure to set them on the same path as their predecessors to stardom. Angry gut wrenching screams are countered with melodic punk vocals to give each track an dark and light side. The Dark is bursting with evil energy and tie that with razor sharp thrashed riffs you get one hell of a potent beast. The Light is the shining pop core upon which the huge singalong chorus’ and strong melodic vocals are built upon. Heavy rocker The Fire really grabs the bulls by the horns and Shut The Fuck Uppercut is a statement of big angry guitars from the word go, where as Top Of The World even borders on balladry! The Blackout have quite possibly leapfrogged the big boys to become to most sought after welsh rockers.

One of the years best debut records comes from this standout new band from America pay homage to country blues with a dash of jack white guitars, a whole heap of great songwriting and superbly delivered vocals. At their best when playing complex bluesy melodies then firing up the fuzz for some excellent guitar solo’s. This album packed full of big riffs which are sure to please any blues-men of this or any era. Standout tracks include the rolling and a stomping   of Dead Wrong and the retro styled rocker The Kids . Bursting with epic potential, a huge rival for The Raconteurs they are sure to be. Live Review from their tour with Black Stone Cherry here…

Top Track: Everything You’re Breathing For – Slow gradually building melodic riffs which explodes with each chorus into a joyous romp of a blues classic, Not to mention a solo of which Jack White would be proud. 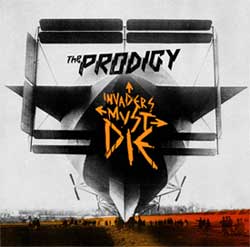 Invaders Must Die sports one of the best starts to any album this year: as soon as you hear the ominous rumbling bass beats of the title track joined by that simple guitar riff you know you’re in for a treat. It’s not long after that they’re joined by thumping drums and an announcement from (guest vocalist) RoboCop saying,

“The Prodigy have returned, and they’re going to rave like it’s 1992.”

It’s a familiar sound: drum machines fused with buzzing guitars and electronic doo-berries and now middle-aged spiky haired fellas screaming punk vocals. So it’s not revolutionary, but you’ll be hard pressed to find many other albums this year providing as much energy and riffage as this one.

Top Track: Omen – you know the one, it’s off the TV advert for the album. It goes doooo dii-di-da-di-da doo0 da-di-da-di-da…

Somehow these guys are still relatively unknown to the world and under appreciated in most critic’s eye. Yet with Art Brut Vs Satan they have produced a fine collection of punk anthems.  Melodies are inventive as ever plus there is a bursting youthful exuberance to this album which gives it such charm and likability.  Their angular striking chords are lovable poet-like vocals are the driving force of their sound. Weaving social commentary and wit, vocal stories from front man Eddie Argos are their greatest strength with no track more captivating that the adolescent tribute of “DC Comics & Chocolate Milkshake”. Eddie takes a tongue in cheek look at public transport in “The Passenger” as well as showing love for “The Replacements” and DIY punk in “Slap Dash for No Cash”.

Art Brut are a criminally underestimated band who deserve more recognition. Against Satan they stand no chance but albums like this they may just win over the record buying public.

Top Track: DC Comics And Chocolate Milkshake – Showing their youthful side on this great catchy tune.

6) Manchester Orchestra – Mean Everything To Nothing

Listening to this album for the first time is a revelation. What is revealed is just how damn great it is! Ditching the softer outlooks of albums previous American indie rockers Manchester Orchestra have adopted a heavier and louder sound on their latest album Mean Everything To Nothing. Yet this is probably the most emotive album on this countdown and vocalist Andy Hull is the reason for this. Lyrically this album is superb while being delivered in a distinctively cracked American accent loaded with passion and enthusiasm. Shake It Out is a perfect example of his fragile yet powerful vocal performance which is backed with an epic instrumental ready to swell your soul. I’ve Got Friends is an infectiously upbeat rocker with burning rhythm guitars and a clever hook while album opener The Only One is a keyboard laced optimistic romp of uplifting pop. Mean Everything to Nothing is grand indie rock with an honest heart, without being too soppy for all those about to rock!