Here we start a roundup of the best new music releases. But were doing it with a difference! Multiple reviewers with drastically different tastes tackle the same albums to overcome bias and prejudice to bring the most accurate, fun and memorable reviews possible! We are not critics after all, just music lovers! Spotify is our friend, so playlists of each weeks releases will be available here too!

Starting off with the new albums from  the quirky chicago  quartet OK GO and Manchesters latest upstarts Delphic following shortly.

OK GO – Of The Blue Colour Of The Sky 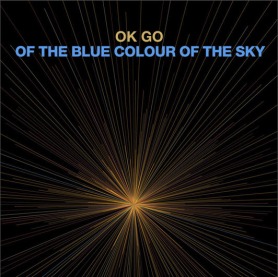 Ok Go have risked it all! They have taken a huge step forwards from their happy punk-pop and rock days into the land of psychadelia with downbeat melodies loaded with effects. Some work brilliantly like the delightfully wierd White Knuckles, but more often than not they are shooting wide of the mark. It’s a brave leap forwards but I feel they have taken a hop, skip and a jump too far this time. Alienating your fanbase is going to bring mixed reactions, lets hope for their sakes the change is a well recieved one. For me they have lost their quirkiness and  alot of their funtime pop! Thumbs up for accurately spelling colour though!

OK GO may have expanded their pop influences to include a bit of  “The One Who Was Formerly Known As Prince And May Well Still Be Known As Prince”, particularly on WTF and White Knuckles, but unfortunately for them it doesn’t lift this album from a general sense of disappointment. It’s like they had looked what their peers  were doing  and decided the best way to emulate success was join them and discard their catchy pop songs for a MOR Indie-band identi-kit.

The best song on the album, Last Leaf, comes way too late to save it. There’s flashes of good songs, but sadly OK GO live up to their name on this album and are rarely more than OK.

Listen to OK Go – Of the Blue Colour of the Sky now on Spotify!