Disclaimer: This was a pivotal night where I fell back into love with live music (post mini-life break). Heading home, I decided to come out of the restful slumber which had consumed these pages almost to the point of extinction. So much to discuss. A fantastic but flawed concept, a stunning performance and unequivocally the worst band we’ve EVER endured!

A “new” concept in gig going. The Pit Party. Promoted and organised by Fluffer records, held resident this warm summers evening in East London’s latest hipster outpost extension of Shoreditch, Stoke Newington. The “Secret” location being a dingy disused nightclub on the high street called EPIC. Bands in the middle, crowd round the outside. Of course nobody has ever done this before outside of the huge arena tours (exception being Monotonix … in 2010!!!).

Immediately I had 2 annoyances with the promotion. Being billed as “360 degrees” is somewhat of a misnomer. 270 maybe, but one side of this band island (connected by low hanging overhead power lines) is piled with amps, meaning you see nothing but disembodied heads peeking above the stacks. Plus the corners were obscured too. Also was this really “sold out”? Given the acres of space I doubt that severely and one can only assume that health and safety had some part to play. Despite this, security was so appallingly lax, that at one point a band on stage were forced to stop mid song to get assistance to remove a power slammed crowd surfer from the stage.

Concept and setting aside… Yowl were the first to trial run the stage. It wasn’t surprising to find out that there is not much space on this small stage for this 5 piece band. Sounding like a rambling politico post punk bunch of indie rockers, they had a bunch of melodies that were cross-wired within their scrappy sound. However someone needed to turn down the volume as it was so loud that the free earplugs did little to dampen the overpowering din. Could have been pretty good if they got their levels right. 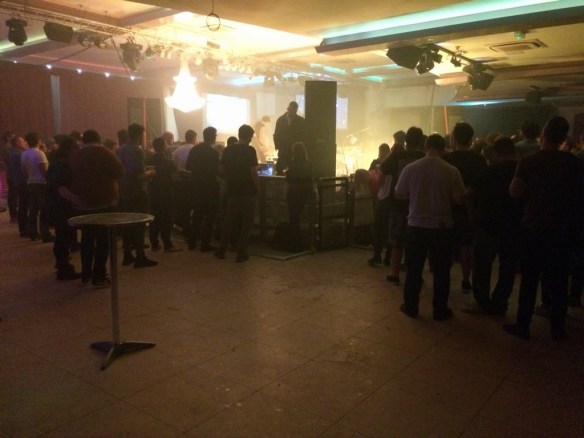 Bad Breeding were up next. They were simply terrible. Nothing much has come close in terms of their appalling, almost torturous sound. They are a self proclaimed anarcho-punks so we shouldn’t have been surprised.  But the wall of guitars was so unbearably loud, out of tune and nothing more then feedback buzzed through the air. Vocals were a mere blip on the sonic scale and most people were simply braving it out as there was no-where else to go! Truly unpalatable, awful band that showed absolutely no redeeming qualities what so ever. The faint applause at the end was merely a sarcastic goodbye and good ridden’s! 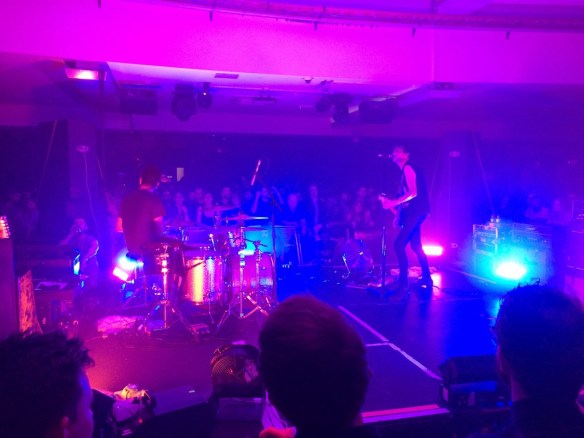 The headline act were no strangers to intimate London venues, but tonight was something really special. Japandroids with with guitar drum combination of soaring indie rock and roll are simply the perfect people to play a pit party. With plenty of space to work with their enthusiasm and stagecraft were at their charismatic peak. The crown were so immensely close they were often singing into the mic and sharing more than just sound waves. It gave a supreme feeling of total immersion and shared gig experience that is impossible to price tag. 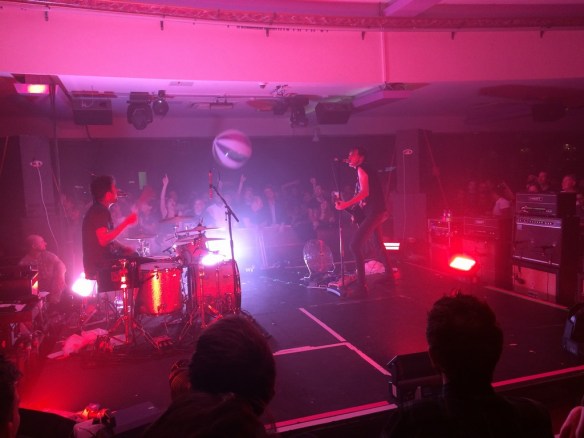 They played tunes across their 3 LP’s from the scuzziest fuzz of the debut Post-Nothing, the sky-soaring chorus lines which dot around Celebration Rock and the maturing methodical pop applications of recent Near To The Wild Heart Of Life. Outstanders were the “North East South West” with its strummy yet crunchy guitars, the ecstatically energetic “Young Hearts Spark Fire” and the cumulative crest of their elements the pop friendly rock-banger “House That Heaven Built”.

Their songs studied the school of “ooh ooh” choruses, whilst firmly putting rock and melody on equal weightings. Their sound is dirty, yet melodically  clean, vocals sung true conviction with an endearing persona that means you’d back them every time.

A totally engaging and affirming, all killer, no filler show of an indie rock crew at the top of their powers. An incredible night of highs and lows! 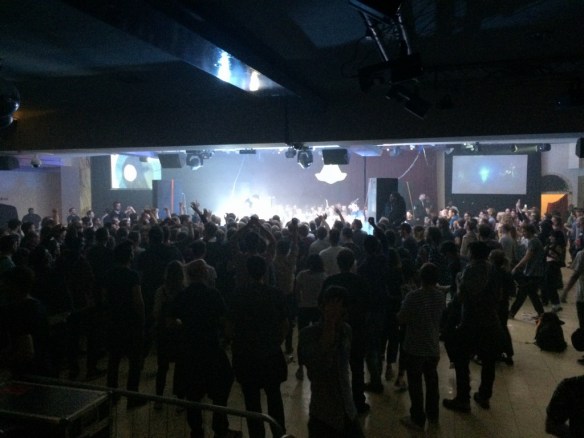