A packed bill tonight kicked off with one of the most improbable bands of recent memory.

Cellar Door Moon Crow are a twin brother drum and guitar duo who also feel the need to have matching everything. From their flat top crops, Nike air tees, tracky bottoms right to their hipster (broom like) beards. That’s where the indentikit ran out though as they play a slapdash but unique take on Beastie Boys meets classic rock, or Slaves meet White Stripes.

Their stage presence was good, if a little overbearing with their terrace chant vocals on full shout when they weren’t rapping. Throwing in the occasion cool vintage sounding (but ultimately simple) guitar solos, leaping around to catchy (but repetitive) catchy choruses and a fair few sampled riffs meant that it was unexpectedly entertaining, even if a little cringeworthy at times. I’ll be checking out there debut for sure. 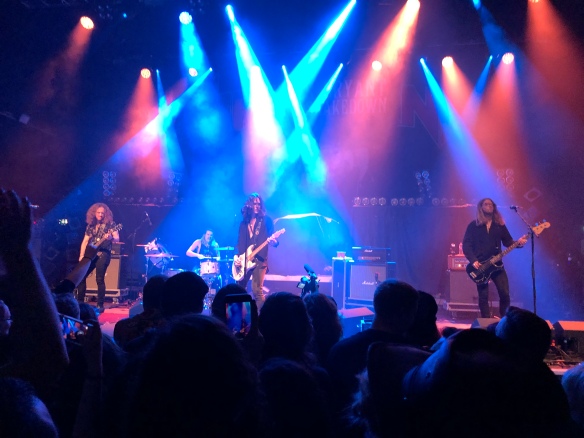 Trying their best to outplay tonight’s headliners, this was a complete package performance. Twisted blues and amped up rock and roll combined to add substance as well as rockin fisticuffs. A compact set which exhibited power, control and precision musicianship.

They also don’t know how to say goodbye with their final track (seemingly) clocking in somewhere in the double figures with so many fake-out crescendos it was hard to keep count. A fantastic rootsy set full of soul which cements their place as rising stars.

The countdown was over…Airbourne were back! It’s been six years since our last encounter (also at The Forum) and I’ve still got the ringing ears to prove it.

Joel O’Keefe and his crew of hard rockin Aussies wasted no time in cranking up the amps beyond 11 to 111 and rampaged into opening number Raise The Flag. Before he did he asked rhetorically ‘Do you like rock?… coz it’s the only thing we know’.

This proved true as their hard partying, beer soaked, adrenaline pumping power rock and roll started out fast and thundered through a well rounded retrospective through their big riff, big chorus, riff rock catalogue. When Joel dedicated ‘Girls in black’ to those in the borderline in 2008, suddenly my memory was suddenly jogged and my fist shot up to the sky to salute the gesture. That show was 13 years ago and it still remains high up in the greatest ever list.

Fair to say they haven’t grown old gracefully, still full of mischief and misdemeanour throughout their showcase trick bag. Some we’ve seen before (trolly surfing through the crowd, running wild through the balcony. But the new additions add that surprise element, each time upping the level of danger to incite the chaos in which they thrive. (Although nothing will quite match them scaling the download stage!) 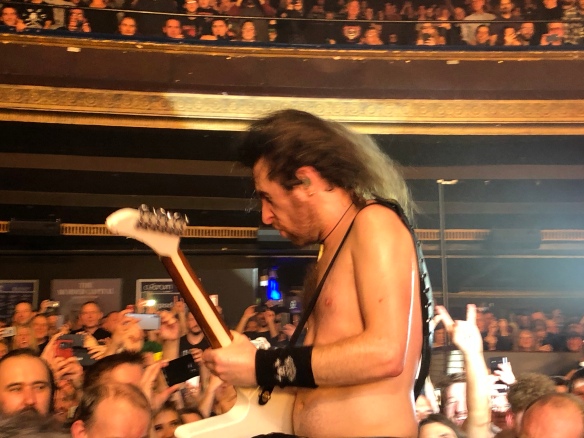 Joel put up a makeshift bar onstage, poured pints of JD and coke before handing them out! Then later proceeded to play catch with the crowd by throwing out beers with inevitable consequences. A few beer showers later he finally got one to its mark, and one even up to the balcony! Less said about the one that crashed into the lights creating a beer waterfall the better! At only 13 songs long, you can see their antics were an integral part of their show.

They were at their best when slowing and extending their mighty breakneck grooves. The great air raid siren build up to ‘Live It Up’ was fantastic, ‘Too much, Too Young, Too Fast’ and it’s head banging sing-a-long plus the anthemic rabble rousing melody of ‘Ready To Rock’. 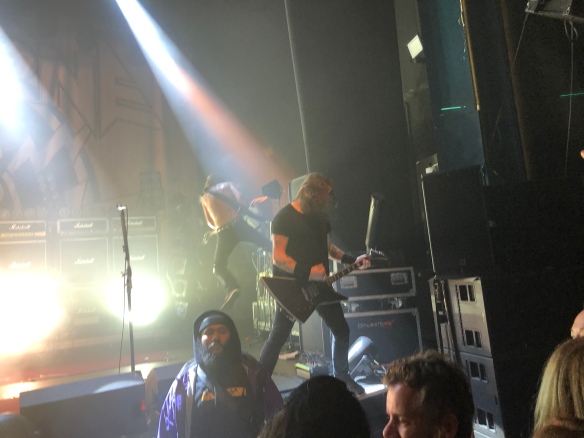 The atmosphere and crowd make tonight. The willingness for everyone here young, old, man and woman to let loose, throw away their normal lives for 90 mins of adrenaline fuelled rawk rebellion. People were flying everywhere, getting stuck into the mosh pit chasms, bounding like leaping salmon and crowd surfing to oblivion.

After 130 days on the road you’d be hard to believe they still had the stamina for a crazed Tuesday night in the capital. But sure enough the Airbourne division destroyed the venue once again.

Deservedly they stand atop of the Rock Mountain once again! Flag raised in one hand and a beer in the other!